(top half) A snapshot of the Brown’s helmet history—details below. (bottom half) Fans are passionate as evidenced by the efforts put into developing new helmet graphics. I do like that first one with the “Dawg” graphic. But I’m pretty partial to the one at the bottom right.  😉

Wow.  My beloved Brownies did it right this past weekend.  In KHT terms, they overcame adversity, did some problem solving, and emerged victorious solving their PIA (Pain In The @%$) Jobs! – by winning over the Baltimore Ravens.  How fun to see them click and really show what the team is capable of.  Afterwards, I went to my closet and moved all of my old orange shirts to the front, realizing it’s “ok” to wear orange again. During the game, I got to thinking about the Brown’s helmets – to some they are plain, almost boring – to me they scream of tradition, simplicity and harken back to the early days when the glitz and glamour of football was more about mud and guts.  I found this great website about the history of the helmets (thanks dawgsbynature.com).  Enjoy the story, and know our Brownies are doing it right and honoring the past, while attacking the future.  One color, no embellishments, just good old orange.  Boring for some – classic for others.  Love it or hate it, here is some of the background that makes it great.  Enjoy!

The Cleveland Browns have arguably the most iconic helmets in the National Football League (NFL). Why? Because they are the only club that is devoid of any logo on the helmet’s sides.  Every single NFL team has their own look and design and sports it proudly on the helmet side.
Some teams even go further and feature some assemblage on their uniform as well. The LA Chargers have lightning bolts across their jersey shoulders and also down the pant legs. The Cincinnati Bengals continue the tiger stripe design with the familiar black and orange streaks on the sleeves and also down the pant legs. The other LA team, the Rams, display a ram head design o their sleeves. The New Orleans Saints display another Fleur De Leis on their sleeve or as an alternate the outline of the State of Louisiana.
The Pittsburgh Steelers offer another iconic helmet design in that their logo is only displayed on one side of their helmet while the other side is vacant. The reason? The answer is: because of luck. From their inception in 1933 and into the 1960s, the Steelers were perennial losers. In the early 1960s NFL and American Football League teams were experimenting with helmet designs. Steelers’ owner Art Rooney asked his equipment manager Jack Hart in 1962 to attach one decal as a test to the side of the then-yellow helmets only to see how they would look. Pittsburgh went 9-5-0 that year to which Rooney called the single decal a sign of good luck. The following season the helmet color was changed to black with the lone decal now a mainstay.
The Browns are famous for their obscure vacated helmet space. And except for those two brown stripes that bookend the center white stripe, it seems that Cleveland has always sported the atmosphere of helmet nothingness forever. Which, isn’t true. In fact, that empty space has been filled several times with several different designs. 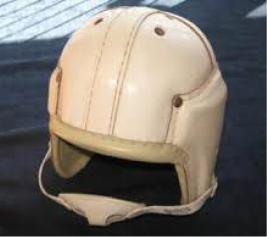 1946-1949 – The Browns were a charter member of the upstart All American Football Conference, an eight-team new rival to the NFL in which Cleveland won all four years of the AAFC’s existence. During this time period, the Browns wore solid white leather helmets. The facemask, invented by Browns’ head coach Paul Brown, had not been conceived yet so these hats were devoid of any facemask. 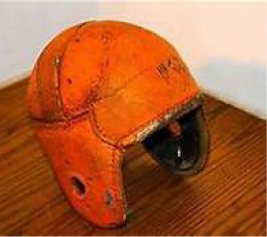 1950-1951 – The Browns along with the San Francisco 49ers and Baltimore Colts were merged into the NFL for the 1950 season and all other AAFC clubs were disbanded with a player dispersal draft. The NFL used a white ball for night games and instituted a rule that prohibited the use of white or light-colored helmets for games under the lights and because of the use of the solid white football. So, the Browns played in the white helmets for day games and changed to a solid orange helmet for the evening contests during these two seasons. 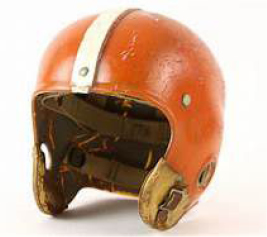 1952-1956 – During the 1940 season, plastics were being experimented with different applications including the usage in sporting equipment by the Riddell Company. Leather helmets were heavy especially when they got wet and had a tendency to lose their shape and even rot. The plastic application was lightweight and could have color molded into the shell. The first plastic helmets had a flat top which would break the ear hole with sufficient force, which of course the game of football could provide. Next, a round top was adapted which seemed to work much better. But initially, the plastic helmets were simply not strong enough to sustain a full game of impacts.
During the 1951 season, a new design appeared complete with inner webbing and ear hole padding which was then approved by the league. The Browns ordered orange helmets and installed a single white stripe down the center without any facemask.
That changed in 1955 when Coach Brown invented a facemask for his injured QB Otto Graham who had broken his jaw and was now healed. However, Brown’s design was made of Lucite, which would crack sometimes and even broke in several games which sent shards of the material onto the playing field. Using Brown’s initial design, Riddell produced a facemask labeled the BT-5, a single bar device made of a composite of rubber and plastic, whose original intention was to protect the player’s jaw area. 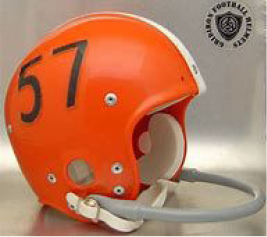 1957-1959 – Along the way, the Browns added the player’s jersey number to the side of the helmet and added a gray single bar facemask to the solid orange helmets with a single white stripe. 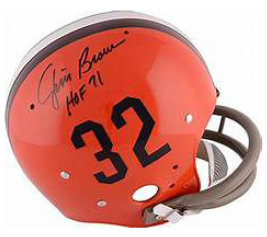 1960 – For a single season, the same helmet configuration that Cleveland wore from 1957 to 1959, two brown stripes first appeared on either side of the single white stripe. Most players now adorned a double-bar gray facemask which was designed to close the opening where the face was visible while the player numbers were still attached to the helmet sides. 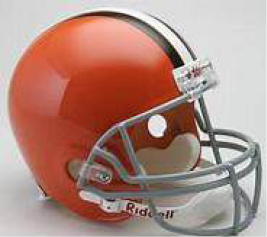 1961-1974 – The solid orange helmet would become a mainstay for the Browns as beginning in 1961 the player jersey numbers were eliminated. The two brown stripes with the center white stripe remained that has been a mainstay since that same 1961 season. The facemask remained the standard gray that all NFL clubs were using, although the design of the facemasks included other situations such as a center vertical bar used mostly by offensive and defensive linemen. In 1974, the Kansas City Chiefs painted their facemasks white so that the referees could easily see when an opposing player had latched onto the frame.
For the 1962 season, the NFL developed the rule making it illegal for one player to grab another’s facemask. 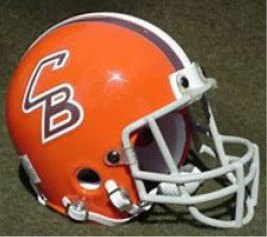 1965 – Blanton Collier had languished in the shadows of Paul Brown for many years as his top assistant. When Brown was fired prior to the 1963 season, Collier was named head coach. The Browns captured the NFL Championship in 1964 with a 27-0 victory over the Baltimore Colts. Fresh off the championship banner, the NFL asked the franchise to add a logo of some sort in 1965. Owner Art Modell commissioned a “CB” design that was crafted and added to the sides of the helmets to correspond with the duo brown stripes that encased the single white stripe. Products were made, but the helmet design never saw the playing field. The reason for the scraped project remains a mystery. 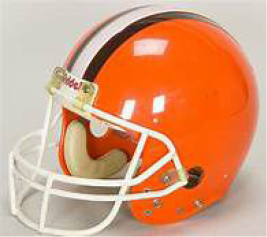 1975-1995 & 1999-2005 – With the Chiefs’ invention of the colored facemask the Browns followed suit and added a white facemask color-keyed to match the uniform design. Everything else remained the same. 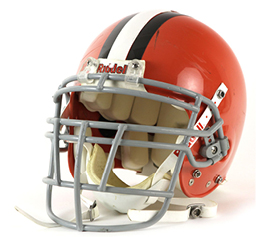 2006-2014 – The Browns celebrated 60 years as a franchise in 2006. As part of the celebration, they still used the traditional orange shell with two brown stripes and a center white stripe, but ditch the white facemask for the 1974 gray facemask.

2006-2008 (alternate) – For three seasons, Cleveland opted for an alternate throwback uniform scheme and chose the 1959 design which featured the solid orange helmet, single white stripe, brown jersey number on the sides plus a gray facemask. 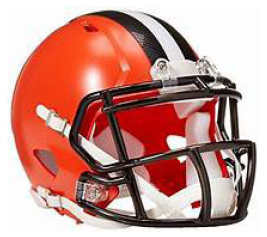 2015-present – The 2015 season brought into the fold a brand new set of uniforms including something added to the helmet design. The orange shell was a mainstay but was now enhanced and with a brighter color, the width of the brown and white stripes were widened a bit and utilized a carbon fiber texture. Also new were brown facemasks – a first. 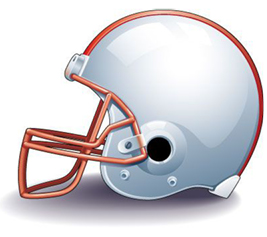 2020? – The uniform authority website Uni-watch.com broke a story in 2017 that the Browns might be looking at re-introducing a white helmet. The NFL has a five-year rule where clubs cannot make a change and wanted either to re-do the current uniforms altogether or add to what they already have. There aren’t any details on the potential white helmet and the picture shown is for display purposes only.   ALL I KNOW IS THAT THIS WOULD BE AN UGLY CLEVELAND BROWNS HELMET!!!